If you build products for a living, there’s a lot to learn from iOS 8's iMessage changes — both on the user interface side and on the customer development side.

(Note: I’m not going to speculate whether or not Apple is gunning for Snapchat or other ephemeral messages services. That article’s already been written.)

Apple's iMessage upgrades show how the company is embracing the ways people have evolved their use of iMessage, and shows a bold willingness to adapt the “most frequently used app on iOS” to the new daily habits of its customers. (As of this writing, iMessage handles 30 to 40 billion messages a day). 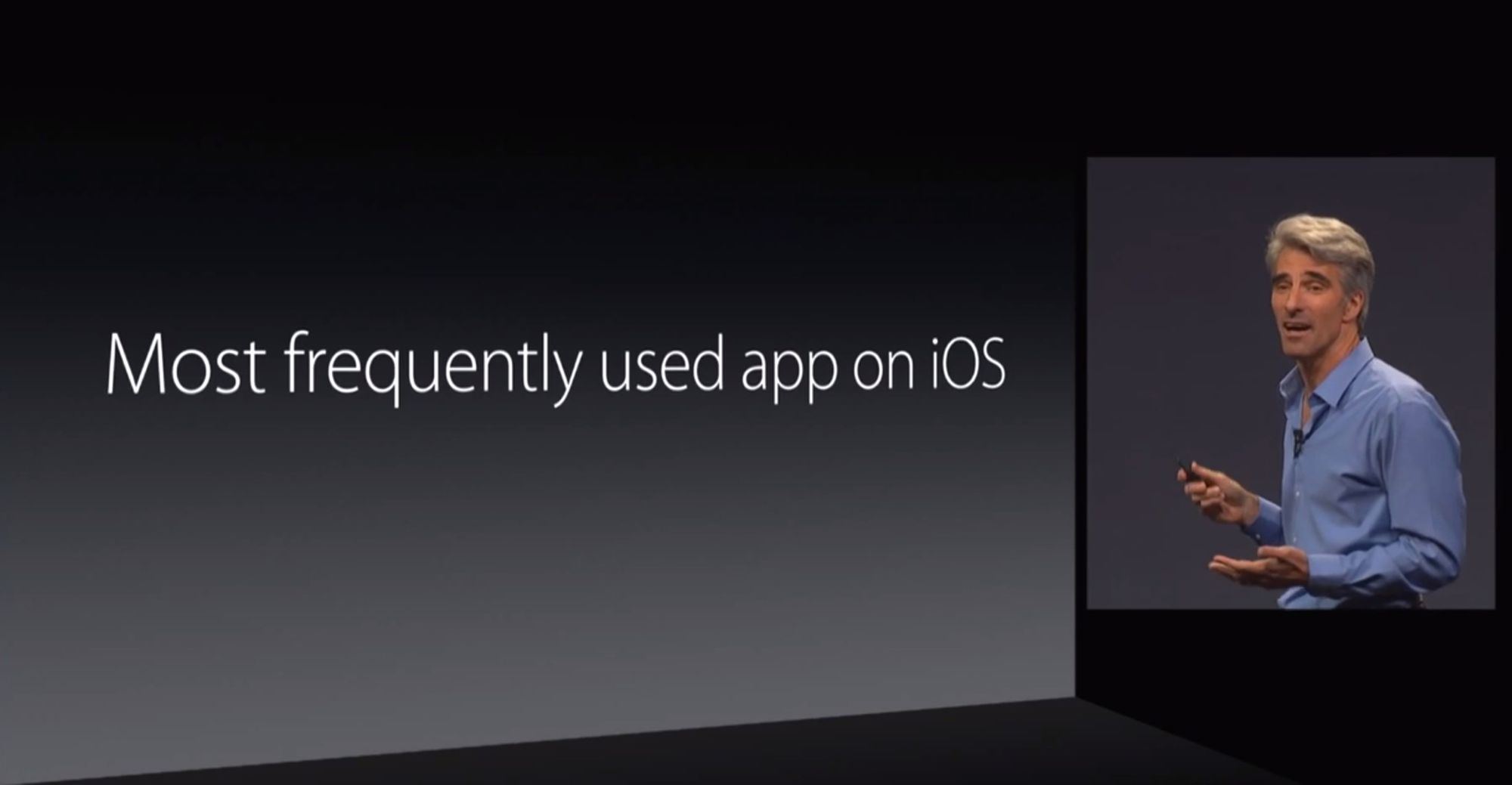 You don’t go and make drastic changes like this an app that’s responsible for billions of messages a day without good reason. This update shows that Apple is keenly aware of the changing habits of their customer base, and I think this is going to be the most important change in iOS since Apple added “swipe up” access to the Camera in iOS 6.

So let’s examine iOS 8’s changes, and let’s compare them to the status quo in iOS 7.

To me, this is the marquee improvement of iMessage, and the attention to detail blows me away. Not only is Apple making liberal use of new gestures here, it’s also embracing the radial menu effect while creating a new native iOS design pattern. Whoa.

Compare the speed and intuitiveness of iOS 8’s interactions to the same “take and send video” flow in iOS 7. It’s clunky, verbose, and needlessly complicated.

This is what it looks like to embrace the context and the most typical workflows of your customers. It’s a realization of many factors:

First, people aren’t recording and sending videos with the flair of a professional cinematographer. They’re typically capturing fleeting moments or selfie videos and photos (argh, I very much dislike that term) and want to share them effortlessly and quickly.

Second, video is now frequently being used to “show,” and not “tell" what you're doing at any given moment. I can’t tell you how many times I’ve been in a public place where somebody simply starts recording a video, waves it around the room, and sends a Snap to their friends to show where they are and what they’re doing.

Third, this is one of many reasons that video is becoming more important as a medium, possibly even more important than photos. Instagram videos, for example, get on average 2.5 times more engagement from users, and video usage amongst mobile devices is exploding. Apple’s clearly trying to get ahead of the curve on this one.

Fourth, people will be quick to pick up the new behavior even though it will at first be foreign to them. The act of sending a photo over iMessage is now such a well-worn cowpath that Apple can make huge gains in usability and customer loyalty by reducing steps. Any feature that makes the most-used app on iOS (think about that again, that’s huge) faster and easier to use will instantly gain usage.

Finally, “tap and hold for x” behavior has been part of life for younger users for quite some time, and Apple thinks it’s ready for a massive primetime introduction. Snapchat, Taptalk, WhatsApp and others have used the “tap and hold for x” action to great success. This move is a reflection of their influence, and a full embrace of how younger customers are using their iOS devices.

Putting audio sharing front-and-center is an interesting move. Using the same recording and sending conventions as video sharing, this puts iMessage on the same level as Voxer or WhatsApp when it comes to media options.

WhatsApp founder Jan Koun was not impressed by Apple’s move, but I think it’s a savvy one. And while I don’t typically use audio sharing, having it front and center as a replacement for the “Send” command is another bold step.

And Apple solves the problem of audio intrusiveness with its “Raise to listen” feature. So instead of embarrassing yourself in the middle of a lecture hall or a meeting by playing the sound over your speakerphone, you can listen to it discreetly by pretending you’re on a phone call. In other words, Apple is protecting you from yourself.

But that’s not all. You can record and send a response to an audio message in the same way — from the lock screen itself! It effectively creates a phone conversation to which you can listen and respond at your leisure. 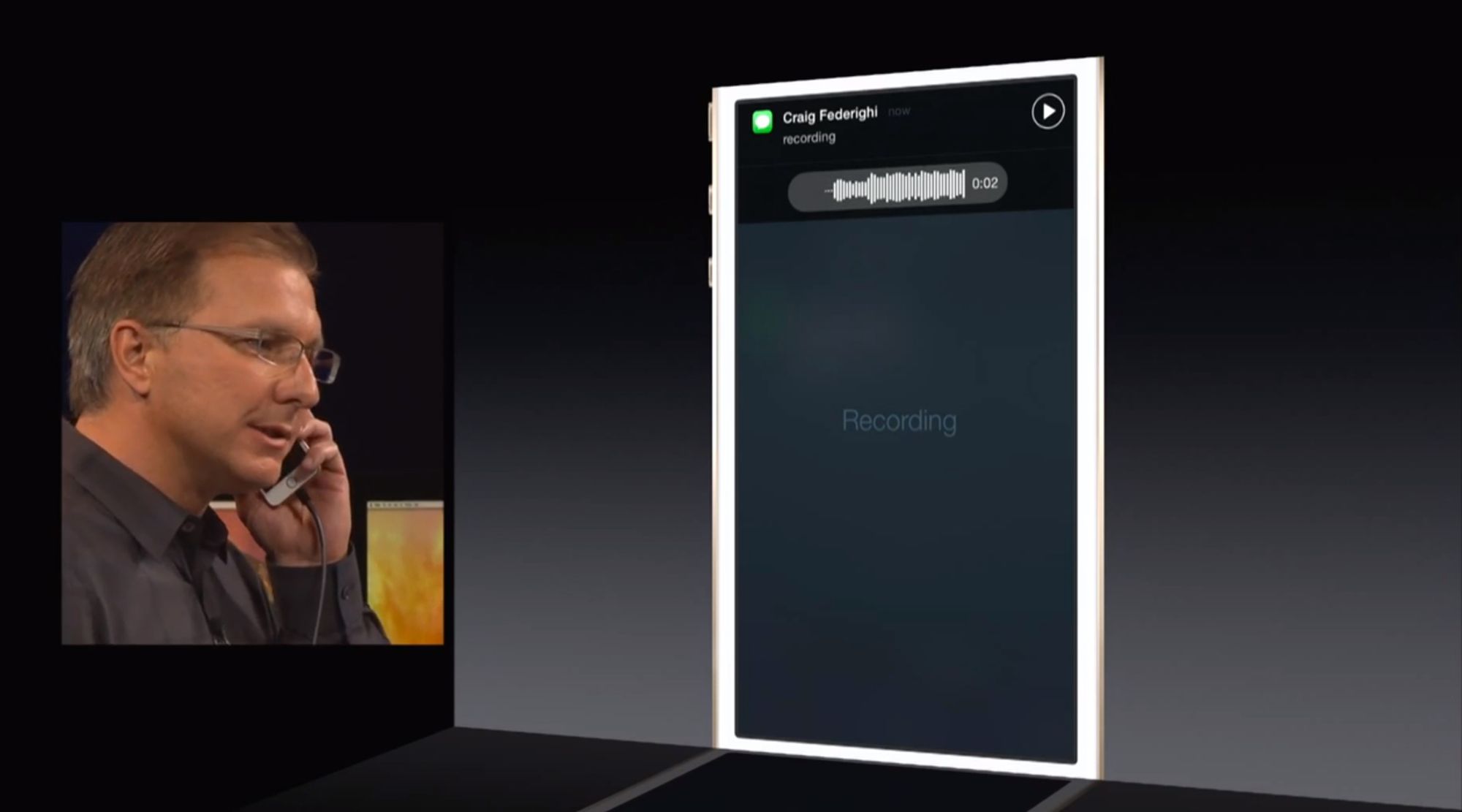 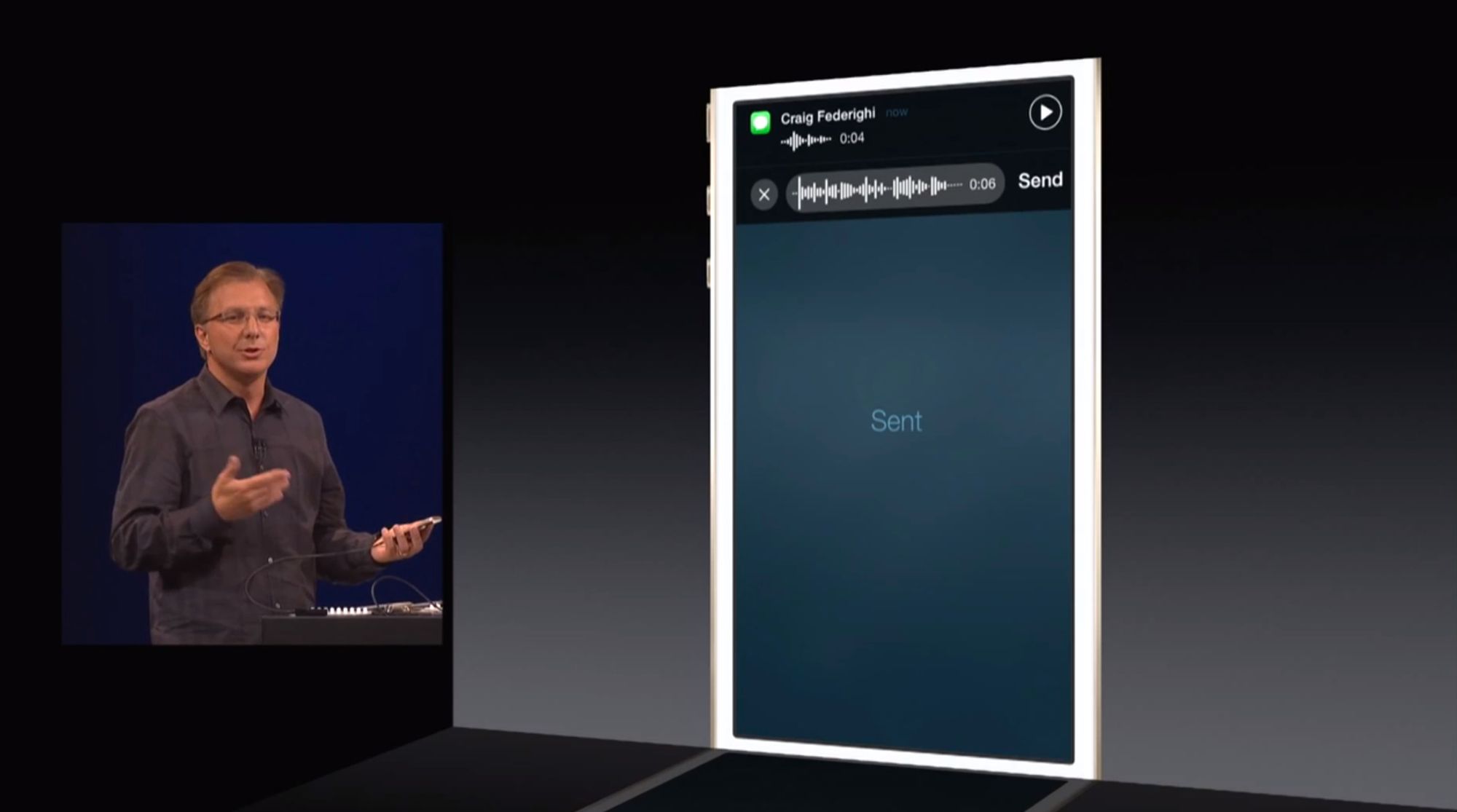 Finally, notice how iMessage doesn’t even reveal the “Send” command until there’s text in the input box. This is Apple again placing trust in and respecting their customer’s intelligence. It also is clearly built to favor iMessage's new fast media sharing features.

Optimized for sending photos recently taken and saved, this new “send from Camera Roll” flow is a realization that the typical person wants to send relatively recent photos — and not those taken days or weeks ago.

Also, notice the subtle confirmation step here. Instead of asking you to confirm that the selected photo is the one you want to send, it simply enlarges the photos and invites you to “Send n Photo(s).” If you decide to add more, you can still do so before you pull the trigger.

Compare this to the old way of doing things in iOS 7. It’s like stepping into Doc Brown’s DeLorean from 1885 after you’ve just gotten out of the one from 1985.

Apple strikes a one-two punch with the fact that this throwaway media expires in two minutes from both yours and your recipient’s phones (I’m not sure how this works over text messaging, though).

The practical benefit is that iMessage domination of your phone’s hard drive will mostly be a thing of the past, and you’ll hopefully never see this extreme usage again: 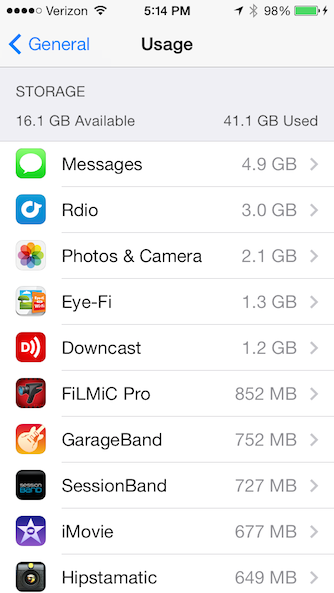 The greatest — and most culturally-aware benefit — is for young customers that are wary of creating media that will follow them around for the rest of their lives. It’s for this audience that iMessage’s exploding media is primarily built, and it’s a brilliant move. 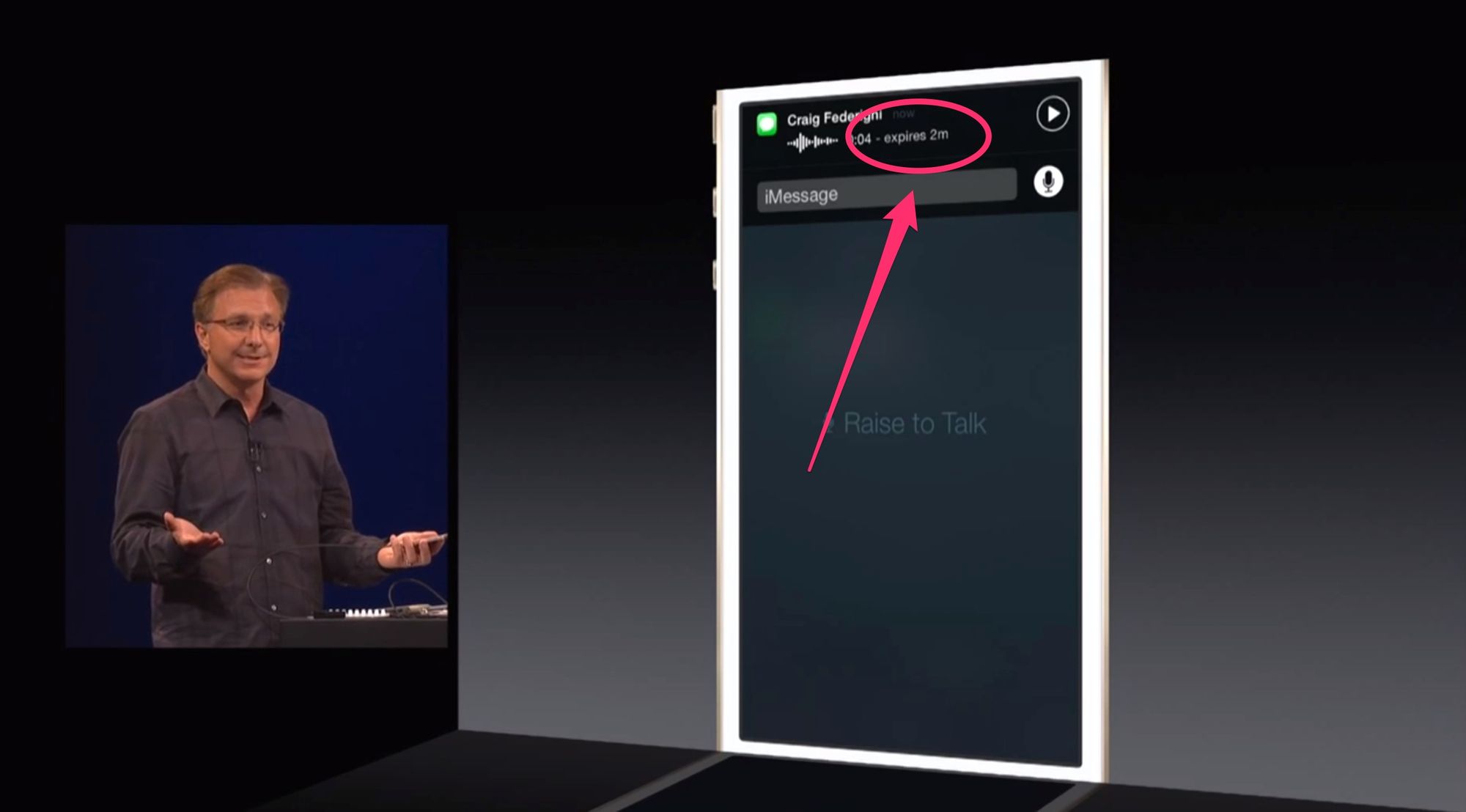 Apple’s iMessage announcements can teach us a lot about the value of knowing our customers. It’s not enough to build products based on rumor, anecdote or speculation. We have to know exactly how and why our customers do what they do, and in what context they’ll be using our products.

That requires a cultural awareness of their fears, pressures, and how they’re using competing or complementary services. And finally, it requires that we as product builders respect our customer’s time and intelligence.

These iMessage features weren’t built by accident. It’s the intersection of context, respect and innovation that led Apple down this path.

I don’t know about you, but I’m inspired to go do the same for my own customers.

IF YOU GOT VALUE OUT OF THIS...

Most iOS 8 GIFs courtesy of 9to5 Mac.

There's a high probability you're working on a product that's going to be used on a mobile phone. And if you're not, you probably soon will be. A lot of us are building mobile apps these days and that means we're sampling each other's

As product designers, it's not hard to see that our world is changing. We're transitioning from a Web-based point-and-click world to mobile, where all the cutting-edge design is now happening. Instead of a click, it's a tap. Or a gesture. Or a swipe. Or